The Legend of Mahsuri

Mahsuri was the daughter of a Thai couple who moved from their native Phuket to the island of Langkawi in search of a better life. She was the most beautiful in all of Langkawi and married the warrior Wan Darus. As was required of him, her husband had to go to war, leaving Mahsuri behind to fend for herself. It was during this time that Mahsuri befriended a young man named Deraman. The village chief’s wife was jealous of Mahsuri’s beauty. She spread a rumour that Mahsuri was unfaithful and was having an affair with Deraman in the absence of Wan Darus. Eventually the rumours grew strong enough that the villagers openly accused her of adultery. Mahsuri pleaded her innocence, but no one believed her.

Mahsuri was to be tied to a tree (or pole) and stabbed to death but it didn’t work. After every execution attempt failed, Mahsuri told them to kill her with her family’s kris. When she was stabbed, white blood flowed from the wound, signifying her innocence. Some birds flew above her to cover her body. With her dying breath, Mahsuri cursed Langkawi to have seven generations of bad luck. The kingdom was soon taken over by Siam. The villagers at Padang Mat Sirat burned their own paddy fields rather than let them fall into the hands of the Siamese.

Now after eight generations the curse is lifted and the Island of Langkawi is prospering. 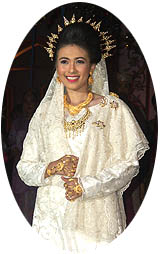